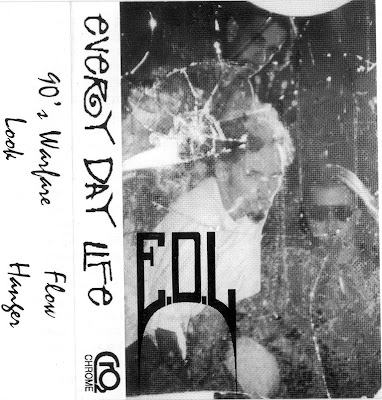 this one had me excited to no end when i first heard it.

the first track '90's warfare' is still probably my fave e.d.l. track with its metal backing, rapcore delivery, use of samples and death metal vocal howls.  sadly, they didn't use much of most of these elements in their following full length albums.

'look' appeared on their debut full length cd, but in a quite different version.
'flow' seems out of place at first, a funky lo-fi hip hop number. its good to have, but easy to see why it was left off of the debut.
'hunger' ends the tape strong...distorted vocals over a steady groove.