Internal Empty - "the daily ritual of distinguishing oneself: reversion" (2003/2009) 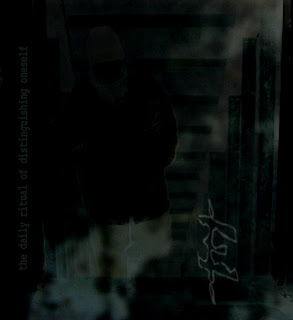 this is the updated version of the 2003 cd for 2009 with new artwork and some remixes/alt.versions.
web only, for a variety of reasons, one of which being the length. the overall sounds herein are a mixed bag of minimal, harsh noise, glitch, ambient noise, vocal noise, & industrial noise.
the original cd ~[The daily ritual of distinguishing oneself (cd:*collected missing works, remixes, shelved tracks: 1997-2003*)]~ was presented in the 'dj mixed' format whereby each track bled in and out of each other a bit. though the cd was cut into 15 different pieces for skipping through easier on your cd player, all tracks were mixed so as to play as one.
here we have the original mixes of the source for the 'dj mixed' presentation of the disc, as well as some remixes and alternate versions. i don't know if this is a bummer or a good thing ...in fact i can post both versions. I might just do that...
(warning: tracks created in different years, with different equipment, recording on various media and volume variances are to be expected)
1. burning bridge 2009 (original version also appears on the split with richard ramirez)
2. inhalation (2009 remix )
3. to lose one's teeth
4. a multitude of failure (the winds of sedentary life)
5. ghosts are haunting...
6. mystique
7. choking calmly (2009 remix of choking)
8. the natural order
9. permutation (extreme neglect cass. noise remix)
10. a dream carnivorous
11. twitch-factory #22
12. rabbit
13. error massage 2009
14. running away (runaway 2009 mix)
15. increasing resentment
TT: 1:27:47
vbr mp3
DOWNLOAD!
*special thanks to jason hevener for archiving some of these old tracks from cassette*
Posted by lack at 10:34 PM