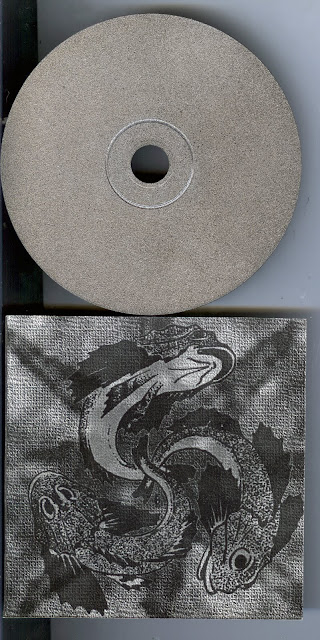 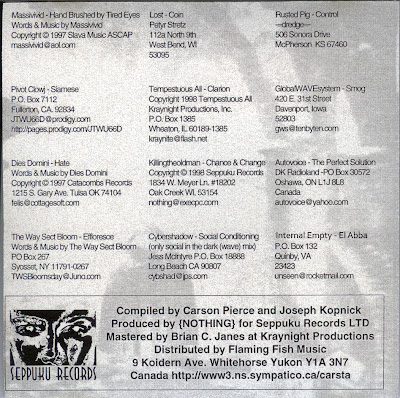 The Celsius Effect was put together by Joseph Kopnick of Killing the Old Man with help from Flaming Fish Music and is one of the more varied compilations to be released in the underground. There are a mix of styles here: industrial, goth rock, acoustic alternative, synthpop, and even a touch of experimental. There is a mix of well-known bands and exciting brand new acts. And there is a mix of familiar tracks and previously unreleased ones.

Massivivid's popular "A Hand Brushed by Tired Eyes" is slotted in as track number one. The energetic guitars, untreated melodic vocals and electro percussion make for a tight industrial rock groove. (available on the Massivivid demo album)

Dies Domini makes its very first appearance with "Hate". The repetitive guitar rhythym drags on for most of the song is only augmented by bits of hard chord strikes. The deeper, retro vocals are different from the other goth bands I've heard and stick to a pretty narrow range. The result is a long song that is hard to sit all the way through. (previously unreleased)

After that, things shift gears again with The Way Sect Bloom's acoustic electro-pop piece "Effloresce". The reverb on the melodic vocals is pretty cool and the positive message is refreshing to hear. (available on The Way Sect Bloom -Effloresce album)

If you like acoustic guitar songs, then "Coin" by newcomer Lost is sure to please. Like the WSB track, "Lost" treats the melodic, easy singing with echoing distortion. Fans of Mike Knott and other acousitc alternative acts should enjoy this fine song. (available on Lost - Deathscapes and Breakdowns album)

Track number six is Tempestuous All's "Clarion". No the 30 seconds is not a manufacturing defect (I asked) but rather a tease. The real "Clarion" is found playing backwards as track number 18. You can load the song into your computer and reverse it to hear it the way it was intended. (previously unreleased)

Killing the Old Man's "Chance and Change" starts off a string of hits on the compilation. It's experimental with dark whispers and strange guitar noises yet has enough structure keep you interested. A creative song from a talented band. (available on the Killing the Old Man - Dementia 13 album)

Cybershadow's "Social Conditioning" undergoes yet another remix, this time being described as onlysocialinthedarkmix. The result is an awesome dance electro track mixed with dark ambient that sounds very different from the original except for the vocals, which are pushed through the second half of this lengthy nine minute track. (previously unreleased)

Rusted Pig wins the "best new band" award with their impressive "Control". No this is not a cover of the popular Abstain debut song, but rather some killer dark electro noise. Pounding bass beats, mechanical percussion, a distorted synth line and whispered vocals blend seamlessly together. The second half of the song plays around with the tempo of these elements and the vocal delivery. (previously unreleased)

If that's not enough to satisfy your industrial cravings, then the double whammy of globalwavesystem's hit "Smog" and Autovoice's incredible "The Perfect Solution" may be enough to knock you off your feet. Two great dark electro tracks from two of the hottest industrial bands in the scene today. (the gws song is available on the Full Frontal Lobotomy compilation and the Autovoice song is from the A Living Death album)

Internal Empty likes to make a nuissance of himself on compilations and tries it again with "El Abba". More experimental mechanical rumblings from this purveyor of noise, but this one's bearable and a bit like Human Knot Farm. (exclusive to this compilation)

And that's not all there is to the compilation. Track 22 is a cool hidden bonus track, but when I asked around who was behind it peoples lip's were sealed. I thought it was obvious who it is but I was wrong.

Overall, this is a pretty good compilation with more variety than most other compilations being marketed towards industrial/goth fans. There are no flops though there certainly are some tracks I will be listening to more frequently than others, namely the KtOM, Cybershadow, Rusted Pig, globalwavesystem and Autovoice string of hits. Now If I could just figure out how to record the Tempestuous All track in my computer so I can reverse it I'd be even more pleased with this fine compilation.
(ed: i did this and included it in this dl)
--Richard Maaranen