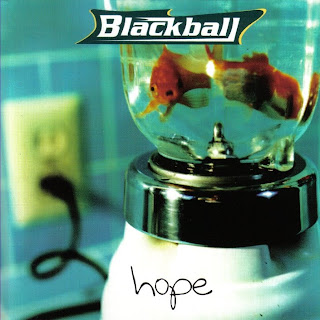 On Blackball's follow-up to the masterpiece of Super Heavy Dreamscape Christopher Scott takes the music in more of a funk direction rather than just alternative hard rock. In places this also seems to be a more personal release for him, writing about his own experiences in a way that only a few songs showed before. It's now almost a Christopher Scott solo album (though he did write all of the songs before as well), where it seems the focus is totally on him and his music, with the other members playing their instruments just to make it all work. Not that this is superior to Blackball's debut. No, on Hope we have the presence of a few less than spectacular moments, but to make up for those are several great songs, the best of which are on par with those from the debut.

I underrated this album for a long time, and I'm still not sure why. The first time I listened to it I was shocked at how different it was from before. There was so much funk and the mood was not as lonely and depressing as Super Heavy Dreamscape. The vast majority of this is, for lack of a better term, a happy release. And that didn't strike me as something Blackball should do. Not to mention I found this in the metal section and there's hardly any metal on it at all. Maybe the chorus of "Funk For Breakfast" but that's about it. The rest is hard funk, but in many places without very very little hard rock at all.

But now, after many many more listens I can really see how great this album is. The happier mood brings in something that we didn't have as much of on the debut. Hope is a more diverse outing than before, and this means that chances are if you end up buying Blackball's two albums you'll enjoy this one more. But I don't and I'm the review so there. Not that I don't have my reasons for liking this album less than the other. First of all there's "All God's Children" which, despite a catchy melody, is far too upbeat even for this album. "What's In A Name" is just kind of a dull go nowhere song with one of the lesser choruses I've heard Scott come up with.

The other tracks are all excellent, each one giving it's little addition to the album. "Here We Are" is especially the place where Scott's personal attitude and vocals come, in a somewhat similar style to "Chasing Everyone Away." It's a song about his struggles with his family, sung with a feeling so strong and in a style that only he and Blackball could do. Another similar in style to "Here We Are" is the closing "One Thousand," another great both songs are excellent, the highlights of the album by far.

I've also grown to appreciate the more fun aspects of this album as well. "Hey Man" is a wonderfully catchy entry and "Twisted Again" is a short but fun song that fits right into the album. "Just Don't Know" is, ok, not one of the fun songs on here, but I've reached a point where the horns on the chorus don't bother me at all anymore. And it's got some of Scott's greatest lyrics too. That's one thing that hasn't changed. What he writes about is different than before, but the way he writes it is the same great stuff we've always had.

Overall Hope doesn't have the strength of melody, atmosphere, or emotion to be considered superior to Super Heavy Dreamscape, but Scott's personal touch to the album, along with more great melodies, makes Hope a great buy. Before he was telling us about ourselves. Now he's telling us about himself, and it all adds up to make Blackball one of the best obscure bands of the nineties, and Christopher Scott one of the most talented songwriters to appear in modern music as well.