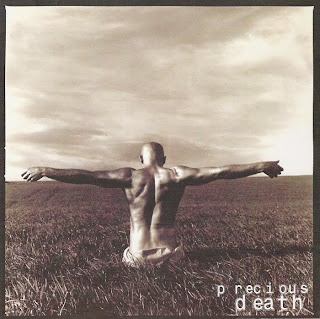 The third and final album from precious death. this was an unexpected release in some ways, as Blackball was already touring and had released their first excellent album.
It's more like a heavier version of Chris Scott's other band, Blackball. Blackball is wonderful, definitely...but "different" Speaking of Chris Scott, he had a very interesting vocal style; almost like a male version of Cher crossed with Eric AK from Flotsam & Jetsam. (ed: the last bit about the flotsam thing i'm not sure of, but he DOES have a unique vocal style)
also included here are the cd only bonus (hidden) tracks. one of which is a VERY strange cover of no doubt's 'spiderwebs'. fun fun fun
Ω
Posted by lack at 12:20 AM