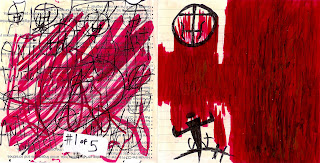 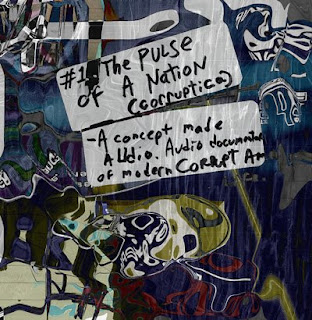 some 8 years after my first cassette, back in '98, just as twitch was dying a painful death, this conceptual cd was released.

this was back when i still held some shameful positions...i was a christian, 'human logic and reason' were bad things (as opposed to faith and 'true knowledge'), and the use of computers in compositions were nowhere in sight...
it was all about cassettes and self righteous hand-me-down 'truth from above'...

oh yes and dorm rooms, many dorm rooms.
track 1 consists of experimental industrial sounds, rhythm, vocals, samples, beats, & noise...which still sounds really good to me, though quite dated.
track 2 consists of a series of mini-cassette recordings of philosophical debates/conversations layered over each other from 97 & 98.
originally drawn up for a cassette release, the actual release came in the form of a ltd.ed. of 5 cd-r with different artwork for each copy.
1.the pulse of a nation (corruptica)