a 60 min cassette of 'rip you apart' harsh noise by indonesian WORLDHATE. also included in a twitch remix of "pure corrupted suckers will be destroyed soon" also done in 98. a lackthrow remix of the same track was done in 2013 and is included here as well.
original cassettes were limited. "self destruction art' was on thtunderground,
-[arrogant dust]- still gets to me. this is all some great stuff though.
massive shame that worldhate stuff is so hard to find. 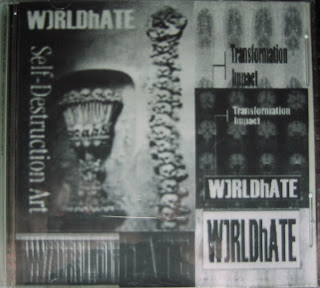 7. sick bureaucrat bastards will be destroyed soon
8. kill the ego
9. after decades of being fooled
10. on the way to total self-destruction
11. ->[arrogant dust]<- div="">


"all angers erupted by worldhate, recorded at the primitive audio work, jakarta indonesia.
CAUTION:please be careful when playing this cassette at high volume leve. THT Underground and WORLDHATE will hold no responsibility for any possible failure/damage of speakers, power amps, and/or audio playback system."