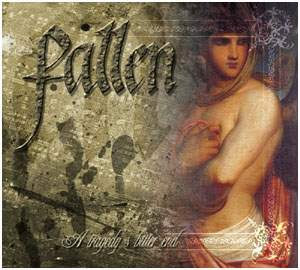 another great cd with less than stellar artwork. excellent atypical funeral doom from norway with deep droning gothy vocals and orchestral elements.
...and review from The Metal Crypt: (http://www.metalcrypt.com)
"This was a surprise. I got this with the latest Runemagick in the promo envelope from Aftermath, and I was like "hmm", because normally Funeral Doom is not really my thing, but I was just blown away by this release. Fallen are from Norway, and they have apparently been around for a while, but this is their debut. And I have never heard a better release in this genre. This album once again points up the idiocy of doing top ten lists every year. If I had heard this, it would have been on there easily for last year.

The major gripe that I and others level at badly done Doom is that it's boring. "Slow" replaces "Epic", and rather than melancholic music, you get somnolent. Well this is veeeeerrry slow music, but it is nothing short of captivating. From the first sweeping chord of the magnificent opener "Gravdans" I was just caught up in this, and I could not stop listening to it. Huge, booming riffs backed by beautiful orchestral keys create a beautiful, compelling soundscape that rises to towering heights of keen despair. There is nothing uptempo, happy, or accessible about any of this, and yet I was caught from the first note. The vocals are a pleasant surprise, as they are not harsh but a low, deep clean voice that is less singing than intoning the lyrics. The vocals actually sound a bit like Big Boss of Root held to a low moan. It's very distinctive, and very cool, and it adds a whole other dimension to already excellent music.

If you like Funeral Doom or depressive music like Agalloch, then you have to have this, as it is just the best album of its kind I have ever heard. A huge, involving, sweeping work that is never anything but bleak, and is too beautiful to stop listening to. Being on a small label, I doubt many people will get the chance to hear this, but they should. A magnificent album."