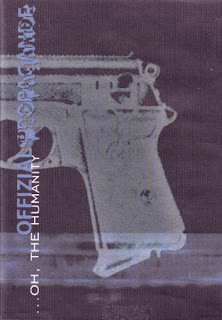 from FUNPROX.com:
Offizial Propaganda is an Italian power electronics act with a strong apocalyptic and martial feel. Titles like ‘Final Solution’ and ‘Long live death’ may give you an idea of the direction of this album, which is devoted to the exploitation of mankind. They deal with politically uncorrect themes in an ironic manner, take for instance the title ‘White n#ggers’. Expect over 50 dense minutes of harsh noises, distorted sounds and drones, folk/classical samples and a variety of (war) speech samples.
This rather aggressive album by the duo B. Malphas (also known from Tronus Abyss) and Draucor Tibes is not something for delicate ears. Offizial Propaganda perhaps doesn’t sound very revolutionary within the powernoise genre, but “…Oh the Humanity” contains some powerful tracks like ‘Odal Europa’, which may bring us closer to the collapse of what’s left of human civilisation.
my own two cents: i wouldn't call this 'powernoise' and it certainly isn't revolutionary, nor is it always that outright harsh, if that's what you're looking for, at least not as far as its sound, though frequently you will find just that.
Download
Posted by lack at 2:41 PM