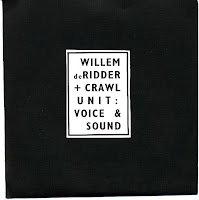 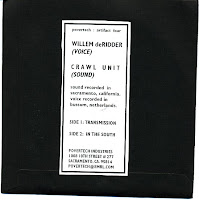 from VITAL WEEKLY:
"WILLEM DE RIDDER & CRAWL UNIT - VOICE & SOUND (7" by Povertech)
The voice of Willem de Ridder could be familiar to you. He once released two stories on CD with a musical intermission by The Hafler Trio. The famous storyteller and radio artist has an awful (but very well cultivated) accent when speaking English ( De Ridder is Dutch). He lets the words come out of his mind and Crawl Unit adds the sound in the background and borrow musical ideas from The Hafler Trio: stretched drones with repetitive sounds over them. Not bad, but I can handle 3 listenings of this at the most."

1. transmission
2. in the south