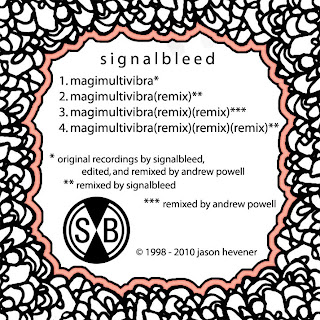 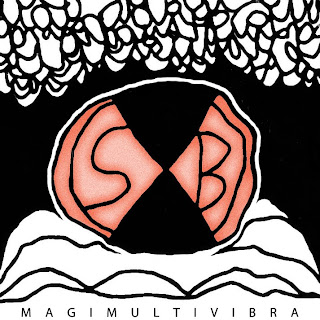 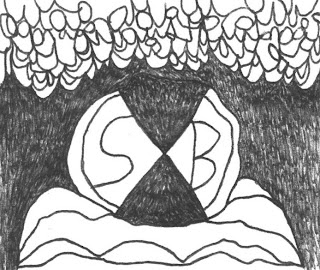 **lackthrow here...   feeling i must mirror this release.  below you'll find the words of jason hevener (signalbleed and the other half of knotsoul since the late 90's) taken from his blog (http://signalbleed.wordpress.com/   -there is tons more awesome stuff to come i'm sure of it!)
all of the kick-ass artwork is by jason as well.  (you'll be seeing more of that here soon, as well i reckon)
i'm so jazzled that jason decided to embrace this project...which was never intended to be what it is now.  what it is now is entirely thanks to mr. hevener.
i do so hope i have something else of his to post here soon.
oh and be sure to check out SUBPRIZE as well.
i can't say enough good things about the man.
and now....a word from mr. hevener('s original post).....

"i had planned to start the blog from the very beginning of recordings, but i decided to kickstart things by jumping ahead.  there are alot of archive materials associated with the first SIGNALBLEED tape (unsound, 1996) that still need to be sorted, scanned, and photographed.  let’s jump to 2008 for an unreleased experiment called “magimultivibra”.
this remix project originated with Andrew Powell who records mainly under the name of Lackthrow.  He edited, layered, and manipulated 3 SIGNALBLEED tracks, “magic tape & safety scissors” (unreleased), “multipulse” (unreleased), and “hold vibrations” (beings like mechanisms, 1998) into one long track.  using the computer, i took Andy’s version and remixed it, then sent it back to him.  he remixed my remix, and returned it.  finally, i remixed his remix of my remix of his edit.  i’ve compiled the 4 progressive versions into a digital album titled “magimultivibramix”:
Ω
Posted by lack at 8:06 PM