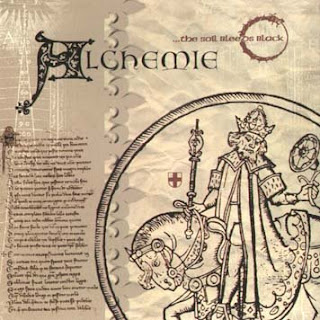 from FUNPROX.COM :
Alchemie originally appeared on the now defunct label World Serpent in 1999. It was the fourth album for the American neo-medievalists The Soil Bleeds Black, a project centered around the Riddick brothers. Their label The Fossil Dungeon has now made this album available again, in a joint venture with Argentina’s Twilight Records. The second edition comes in a nice brown/gold digipack and has no less than three bonus tracks.


Most tracks follow a similar pattern: quite heavy repetitive percussion, a clear medieval melody lead by flute or organ, embellishment with bells and samples, alternating male and female vocals with a ritual character. Especially the songs sang by Eugenia Wallace appeal to me, of which ‘Luna Begets Mercury’ is a good example. Another highlight is the bombastic ‘Lapis Philosophorum’, which features the typical musical contribution of Arcana.

All in all Alchemie is quite a good album, which shows a band in progress. The Soil Bleeds Black has clearly progressed from their earlier albums, but have not reached yet the musical skills and richer arrangements of later work as Lead into Gold or Mirror Of The Middle Ages.