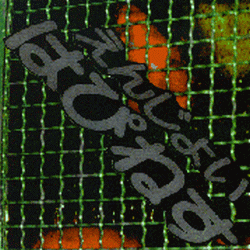 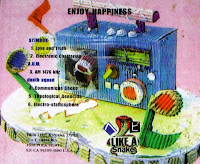 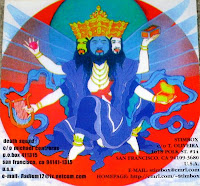 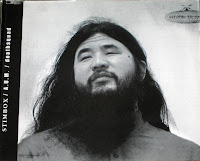 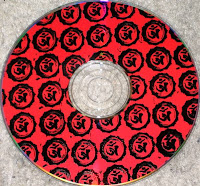 very very sweet harsh noise cd from 1996, limited to 993 copies on cd.
btw. a.u.m. is a collab by the other two artists here.
this is a review from Sinkhole e-zine:
"· don't let the obnoxious artwork and colors lead you astray from this release. stimbox, death squad and a.u.m. (a collaboration between stimbox and death squad) have created some of the best harsh noise around. according to the h.l.a.s. website, the music on this cd was inspired by the tokyo subway gassings, although that isn't apparent in the music itself.

·stimbox offers up two high-intensity tracks that'll leave you begging for more. dynamic walls of noise are created and built upon, bringing forth a wide range of sounds that won't cease to amaze you. the a.u.m. track, am 1476 khz starts off sounding like a mixture of radio broadcasts, but after a minute various tones start in and degenerate into violently focused noise. with communique shoko, death squad take aim on feedback and pull the trigger. it's a blaringly simple piece revolving around feedback with a few slightly-altering effects occasionally abused. theological genocide starts off with eerie ambience and some played-out terminator samples. it quickly turns into a jumbled blast of furious static and high-end wailing. at almost four minutes, it's long enough to enjoy but short enough to leave you wanting more. electro-staticsphere is composed of piercing high-end whining and low-end static rumbling, making for a diverse and constantly changing piece with loops and builds upon itself

· this release has been placed on the essential list, if not only for the a.u.m. track and death squad's electro-staticsphere. the other tracks are excellent as well, but those two stand out above the others for both their diversity and intensity. go get a copy of this while you still can."