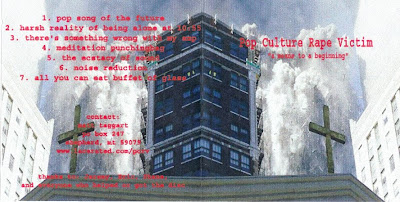 "POP CULTURE RAPE VICTIM - A Means To A Beginning
Self released CDR In a plastic sleeve with a full color insert. 7 tracks here, the disc opens with "Pop Song of The Future" a slow grinding noise track, with a cyclic destructive feel. The foundation grounds away and above it harsher sounds crash around it. It doesn't change a whole lot from the pattern established, but it's not that long, and it's an effective bit of sonic nihilism. "Harsh Reality of Being Alone at 10:55" roots itself with a dense low end rumble pierced by higher frequency stabs and slices rearing up. The heavy distortion saturation on this track in the low and mid range corrosions reminds me slightly of Lefthandeddecision, but the ultimate result is a bit different than LHD. "There's Something Wrong With My Amp" churns with a heavy low end as analog chirps and feedback scorch in a fractured fashion, mid range distortions flesh out the track. "Medication Punchingbag" has a slightly more spastic presentation using the same type of sonic elements of the previous tracks. "The Ecstasy of Sound" is a more droning sort of piece that still maintains the harsher elements, of feedback and some midrange noise. The last two tracks maintain a similar feel, this is harsh and noisy and chaotic at times, but it has a foundation through it that keeps it from being over the top and ultimately more engaging than some of the extreme noise stuff. The tracks have a nice movement in them, even when sounds don't change that much they do shift to evolve the track. A strong release of harsh but not too harsh noise for those that aren't ready for Government Alpha, but like their Skin Crime just fine. - Scott"
1. pop song of the future
2. harsh reality of being alone at 10:55
3. there's something wrong with my amp
4. meditation punchingbag
5. the ecstacy of sound
6. noise reduction
7. all you can eat buffet of glass
∆
Posted by lack at 10:05 PM