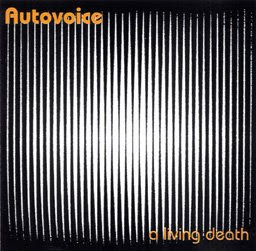 Autovoice's debut full-length filled with electro-goth influenced EMB industrial. There is also a prominent 80's influence if you ask me, quite sweet in that dark goth 80's way.
dance or smash....or both.
an old review from audiomata zine:(that i disagree with a little bit)
"Autovoice is certainly all over the place musically speaking with the release of "A Living Death". Within the first three songs they have covered mourning Gothic vocals, crushing Power Noise percussion, and melodic Synth-Pop. At times such a diverse choice of musical elements can work to the advantage of the band, but in the case of Autovoice, I think it is more of a detriment.* I found myself unable to follow the changes in tempo, mood, and styles from track to track without wondering if I was listening to the same band. The engineering and orchestration show signs of excellent skills on the part of the young trio, but it simply isn't enough to detract from the obvious lack of cohesion between tracks. Some of this could have been fixed with a better choice of track order, starting with some of the slower songs and gradually moving towards the faster material instead of the rapid tempo changes that exist. Autovoice definitely have a few areas for improvement for future release, but they are certainly headed in the right direction.
Autovoice is:
Steve Shoe - voice & electronics
Johnny Space-Echo - electronics & voice
Morse Code - tape manipulation & sound effects"


*i definitely disagree with the reviewer here about the diverse influences and switch ups.
its a good album all in all.
1.We Know What We Know
2.Prevent The Future From Happening
3.Photorealism
4.Passing Out of Sight
5.Construct
6.Fallout
7.The Perfect Solution
8.Human Condition
9.Factor
10.Your Number One Dance Song
11.Monoculture
12.Collapse