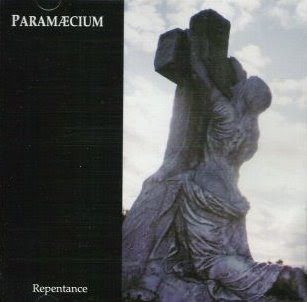 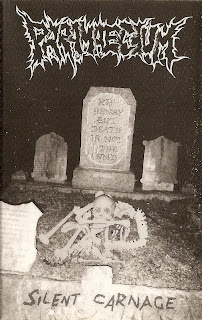 a couple of months ago i began ripping the "silent carnage" tape by austrailia's Paramæcium, but decided against it in favour of the cd reissue with bonus tracks.
why not? it has a cleaner sound and the two recorded tracks are very much well worth having.
the original "silent carnage" songs sound markedly different from what came after in the career of Paramæcium, but are easily among my favorite output of theirs, though it isn't really fair to measure it all up side by side. (how's THAT for a run-on sentence?!)

Tracks 1 and 2 were recorded in 1994 with new arrangements and feature the band's "Within The Ancient Forest" lineup, while straying FAR from the "within..." sound.
Tracks 3 to 6 are the 1991 "Silent Carnage" recordings. a recording of "abstraction" would have been a magnificent addition to this EP...it definitely should have been here, i have no idea why they didn't record/include it here.
still, this is a ridiculously sweet EP of old school death / doom.